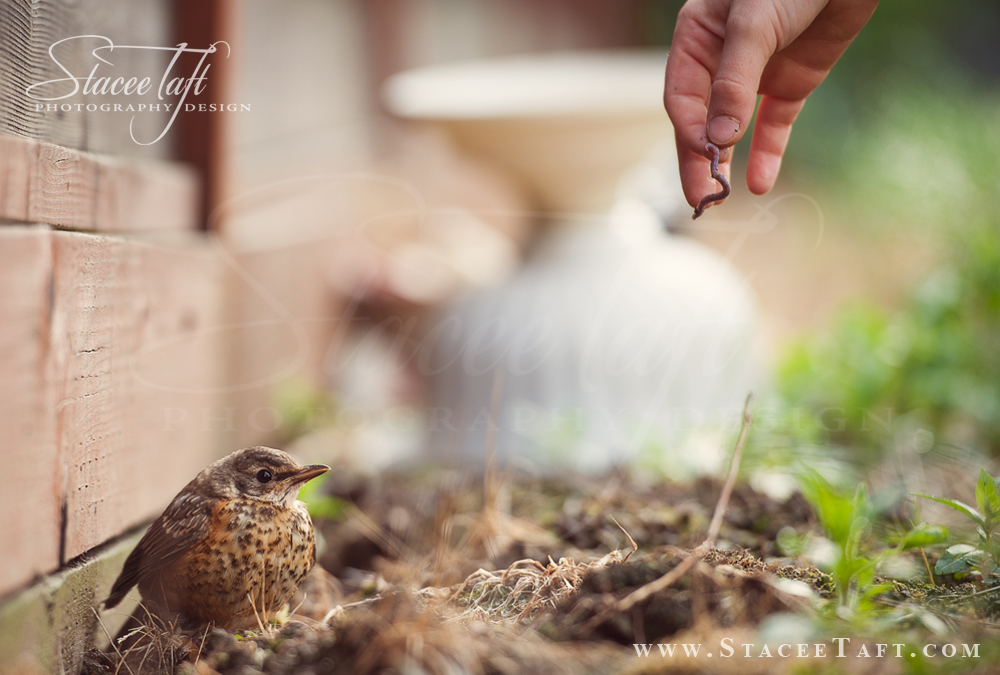 My children pounded on our bedroom door this morning, which was highly unusual.

Thankfully I was already up getting ready for the day.

I opened it and was greeted by strained faces and my daughter saying,

“Mom, something happened and it was really cool and really sad.”

I wasn’t exactly sure how to react or respond to such an odd remark,

so I simply asked her to expand on what had actually happened.

She went on to explain that she was cozily sleeping when

there was a huge thud against her window.

Evidently my son was already awake and went in to see what had happened.

They then had discovered that a juvenile robin had flown into the window.

They speculated it had rolled down the roof, attempted to fly and landed, wings spread,

on the dewy lawn below {photo below on right}.

Once the story had been told, we all went to see if the bird still lay on the grass.

Sure enough, the poor little fella was still there sitting on the cold, wet grass with his wings spread out wide as if caught in mid-flight.

For a moment I didn’t know if he was still alive or not.

As I was admiring his beautiful plumage I noticed his eyes open, then his head turn a little.

Still he did not move his wings.

The kids, in their pj’s and warm coats,

ran to get our bird book to determine if our guess was right about it being a young robin {photo above on left}.

Sure enough, they found we were indeed correct.

They really wanted to pet the sweet, helpless bird… obviously, I didn’t allow it.

very close to his face.

He didn’t eat the worm, but didn’t flinch either.

Eventually he slightly pulled in his wings, giving us hope that he hadn’t broken them.

I had taken a few photos with my little point and shoot I keep in my purse,

but was frustrated knowing that my full format camera was up stairs.

So I went to get it.

Pretty fast, in fact, for a little one who just slammed into a window; he hopped all the way over near our fence.

I’ve been told by bird experts that large camera lenses look like eyeballs to wild animals and it can really freak them out.

Evidently, this sweet robin was no exception.

I felt bad I had scared him, but we were delighted that he could move.

We followed him as he hopped around the yard.

My son decided to offer another worm, but, again, the bird didn’t seem interested in it at all.

Finally he hopped off to the corner of our yard, thick with ferns and we headed in for breakfast.

We never did see him hop or fly away, but he wasn’t there when we checked after breakfast.

We’re hoping he recovers fully and doesn’t fly into any more windows.

I’m thankful that the phrase “really cool and really sad” wasn’t anything worse.

If you’re curious, the first image is with my Nikon D700 and the two images in the diptych are from my little point and shoot.